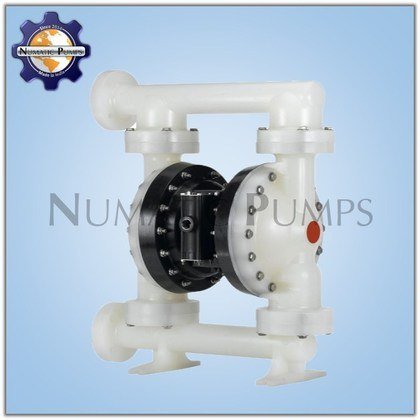 An PVDF Air Operated Diaphragm Pump is a self-priming positive displacement pump that is powered by compressed air, making it inherently safe. It operates by using two diaphragms that reciprocate back and forth via an air valve positioned in the pump’s main body. As one diaphragm fills with liquid, the other empties fluid via the outlet. Within the pump, there are balls that function as valves, allowing the pump to be positive displacement. The balls are supported by seats, which allow the pump to shut inside.

What is an pvdf air operated double diaphragm pump?

How does an PVDF air operated diaphragm pump work?

An air valve situated within the pump’s core chamber is the primary driving force behind this design. Air enters the valve and is directed to one side of the diaphragm, resulting in a vacuum on one side and diaphragm compression on the other.
Suction and delivery manifolds, diaphragms, a central air valve, and balls and seats that function as valves within the pump are the essential components of a PVDF air operated double diaphragm pump. Our AODD Pumps has optimised its AOD Pump design to reduce the number of components within each pump to a few, whereas many previous generations of pumps continue to employ over 50 parts, making maintenance difficult.

Miniature Air Operated Diaphragm Pumps perform differently from traditional designs because of the insertion of springs between the balls and seats, allowing the balls to return to their original position regardless of orientation, whereas classic designs rely on gravity.

Such equipment can only be controlled by regulating the amount and pressure of air entering the input valve. Each diaphragm may be compared to a pair of lungs, which means that depending on the fluid and viscosity, a pump must work at the correct speed in order to function properly. When an AOD pump works at too high a speed, each diaphragm does not fill completely, lowering efficiency, output, and pressure. This is especially frequent in viscous fluids like waste oils and sludges.